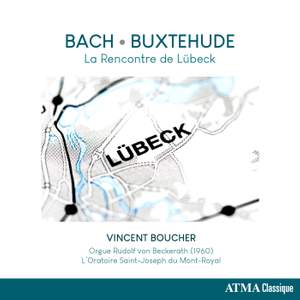 At the age of 20, Johann Sebastian Bach walked 400 kilometres to Lubeck to hear Dietrich Buxtehude, the greatest German composer of the day, play the organ. This musical pilgrimage is the inspiration behind Vincent Boucher's latest recording. He performs organ works by Bach, the cantor of Leipzig, and Buxtehude, the great master of Lubeck, on the Beckerath Organ at the Oratoire Saint-Joseph du Mont-Royal.

Vincent Boucher is enjoying a true double career, pursuing both music and finance. The Conservatoire de musique de Montreal unanimously awarded him a first prize for organ and harpsichord. He also completed a doctorate in performance at McGill University with John Grew and William Porter, and furthered his studies in Vienna with Michael Gailit, in Boston with James David Christie, and later in Paris with Pierre Pincemaille.