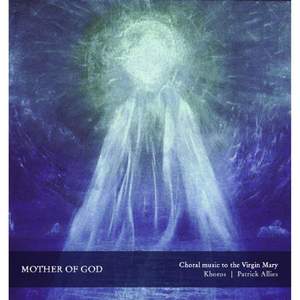 Mother of God – Choral Music To the Virgin Mary

Croad: To The Immaculate Heart Of Mary

’Mother of God’ - Choral music to the Virgin Mary is the debut CD of Khoros, a choir formed in 2011 by Patrick Allies. In seeking a programme that would best demonstrate the choir’s versatility, Patrick drew together music composed in honour of the Virgin Mary, particularly works that refer to or celebrate some of the many names by which she is known. Such a programme enabled the presentation of music from Plainsong and renaissance polyphony to contemporary and includes two premiere recordings.

Ben Rowarth’s ‘Regina caeli’ (for SAT voices) and Libby Croad’s ‘To the Immaculate Heart of Mary’, which was commissioned for this disc, sets an anonymous 19th-century text published in Volume I of the Carmelite Review of August 1892. The earliest music in the programme is the Solemn tone plainsong ‘Salve Regina’.

Hildegard of Bingen’s own mesmerising, flowing plainsong in ‘O viridissime virga’ is sung by the women’s voices. From Tudor England, Robert Parsons’ setting of ‘Ave Maria’ concludes with an Amen of exquisite beauty, considered to be one of the finest passages of music composed in the 16th Century. The same ‘Ave Maria’ text is subtly combined with that of W B Yeats’ poem ‘The Mother of God’ in the vivid and powerful ‘Mater Dei’ by Sarah Rimkus. The seven-part setting of ‘Ego flos campi’ by Jacobus Clemens non Papa is full of sumptuous choral counterpoint, and an equally sonorous effect is accomplished in the rich contemporary harmonies of Eva Ugalda’s setting for men’s voices of ‘Ave maris stella’.

The recording venue was the compact but resonant chapel of Downing College, Cambridge.