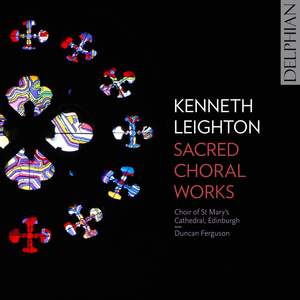 Wassail All Over the Town (Arr. L. Leighton for Choir)

I. Christ in the Cradle

II. Christ in the Garden

III. Christ in His Passion

Leighton: What love is this of thine?

Leighton: Of a rose is all my song

Released to mark the ninetieth anniversary of the composer’s birth, this programme of Kenneth Leighton’s choral music reflects his outstanding accomplishments in the genre across his entire composing career: it includes Leighton’s earliest and last pieces for unaccompanied choir, three Christmas carols, two extended masterpieces, and two works composed for the Choir of St Mary’s Cathedral itself.

Extensively praised under its current director of music Duncan Ferguson, the choir has both a historical affinity for this body of work and a sophisticated musicianship which hereproduces performances of focused maturity and depth.

It’s Ferguson’s strong grasp of [Awake my glory’s] architecture which impresses, and the vibrantly assured responses of the singers in all four voice-parts…Throughout, organist Joseph Beech provides a sensitive underpinning to the choir’s sharply communicative singing…As a single-disc introduction to Leighton’s choral music – and there aren’t too many available – this is an easy recommendation.

The children of St Mary’s Choir might not have the purity at the top of their register that characterised the choir’s first recording for Duncan Ferguson...But this is still recognisably St Mary’s: no-nonsense singing, highly disciplined yet projected to the back wall and laid over well-behaved adults with well-supported voices.