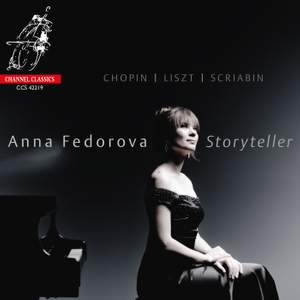 Fedorova’s Chopin is unfailingly sensitive, poetic and tasteful, the phrases flexibly shaped even when the technical going gets tough. In Liszt and Scriabin, too, she never forces her tone and... — Gramophone Magazine, February 2020 More…

In earlier days these were the genres one could mainly encounter in literature or folklore. That is, until Chopin, Liszt and Scriabin introduced them to classical music. In her album, ‘Storyteller’ Anna Fedorova is focusing on these three composers, how they explored the poetic genres and how their compositions reflected the actual pieces of literature that inspired them. The repertoire suits Fedorova's playing: ‘poetic, delicate and dynamic’ (Luister Magazine)

Anna Fedorova is one of the world's premier young pianists. From an early age, she demonstrated an innate musical maturity and outstanding technical abilities. Her international concert career took off while she was only a child, and audiences around the world were stunned by the depth and power of her musical expression. Critics have praised Anna's signature “sweet modesty and wild expression,” which rendered listeners “completely taken by surprise, compelled and astonished.” At almost 24 million views, the live recording of Rachmaninoff's Piano

Concerto No. 2 in the Royal Concertgebouw Amsterdam has become the most watched classical concerto on YouTube and is highly praised by many renowned musicians. Anna Fedorova then became the face of the Sunday morning series at the Royal Concertgebouw Amsterdam in season ’17/18 and returns annually to perform with orchestras. These concerts are always recorded and live-streamed by AVROTROS, the Dutch classical music broadcasting corporation.

Fedorova’s Chopin is unfailingly sensitive, poetic and tasteful, the phrases flexibly shaped even when the technical going gets tough. In Liszt and Scriabin, too, she never forces her tone and never loses her cool...On a scale between over-cautious and reckless she would definitely be placed more towards the former. If she is a ‘storyteller’, as in the title of the disc, then she is more an unobtrusive guest than a demonic Ancient Mariner.