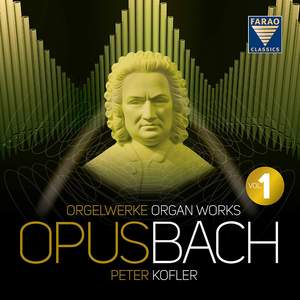 In March 2017 organist and harpsichordist Peter Kofler launched his ongoing Bach project: a complete recording of Johann Sebastian Bachs organ works. Unlike performers of earlier complete recordings, Kofler opted for a modern instrument for this enterprise. For not only was J. S. Bach the perfecter of a great polyphonic era, he was an innovator and stimulator as well, particularly in the field of organ music. Be it the introduction of the tempered tuning system, the virtuoso use of the organ pedal or the development of the fortepiano: Bach significantly contributed to each of them and was one of the first to employ the possibilities of these modern developments. The four-manual Rieger organ at the Jesuit church of St. Michaels in Munich with its 75 stops offers many of the characteristics verifiably valued by Bach. It features an imposing fortissimo and a multitude of characteristic stop timbres that the cantor of Leipzigs Thomaskirche partly could only dream of in his days.

Kofler plays with rock-steady tempos and rhythms, immaculately clean articulation, and well-judged choices of registrations, stops, and
balances. His tempos are uniformly brisk, energetic, and well sprung, which is how I like to hear Bach.

Kofler’s performances find an ideal balance between stylistic integrity and interpretative individuality, and there is little here which is going to cause offence to even the most hardened Bach specialist. At the same time, enhanced by that glorious recorded sound, Kofler’s playing has a real sense of communication, portraying these works with conviction and enthusiasm supported by a splendidly robust and fluent technique.