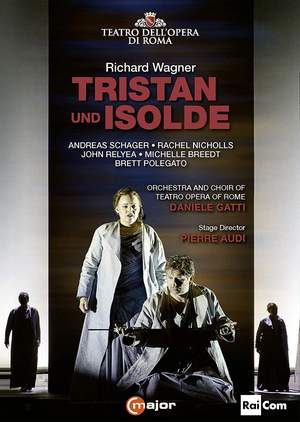 This production of Wagners Tristan und Isolde, directed by Pierre Audi, has received high acclaim in Paris and Rome. 'Pierre Audi is one of the few directors who works with Wagner by subtraction, imagining the story in a minimalist dimension, out of time, abstract: Don't miss it'. (Il Messagero). 'The Orchestra of Teatro Opera of Rome proves with this interpretation that it is one of the best opera house orchestras in Europe'. (KlassikInfo.de) 'Ecstasy, emotion and effect unleashed by Daniele Gatti at the podium of the Orchestra was overwhelming'. (News.at). 'Excellent Andreas Schager as Tristan, vocally strong Rachel Nicholls as Isolde'. (KlassikInfo.de)

Immediately there’s well-prepared singing and good coordination with the pit...The two main soloists are good here – they’re both wonderfully respectful of text and project their words clearly even when there’s a bit too much volume coming up from the pit...Gatti has brought his orchestra up in the piece well. He’s lively and never self-indulgent but I think you can hear that this ensemble’s great Tristans are still to come.

Audi's production is a limited affair...The performance’s virtues are thus mainly musical. If not always ideally steady, Rachel Nicholls’s Isolde is impassioned and purposive. Expressively solid and vocally bold, her singing is aptly scaled and her diction focused...Schager’s Tristan possesses many virtues. Vocally he’s strong, enduring, and able to encompass all the notes..Breedt’s Brangäne is firm and communicative...The Roman orchestra makes a decent showing, its richness of sonority occasionally compromised by slackness of ensemble.