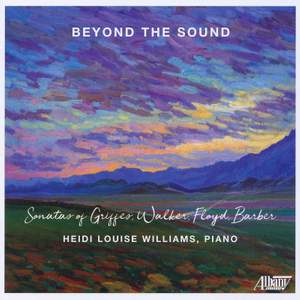 Heidi Louise Williams performs piano sonatas by American composers with the oldest work written in 1919 and the most recent in 1991. Charles Tomlinson Griffes, George Walker, Carlisle Floyd, and Samuel Barber all used their art to explore imponderable realities that could be more fully accessed within the realm of music. These artists absorbed a variety of musical languages into their own, foreshadowing, in many cases, the postmodernist aesthetic of stylistic coexistence. From Walker's inclusion of folk tunes to Barber's gripping sincerity, from Floyd's devotion to human narratives to Griffes' persuasive fusion of styles, these works rely in some way or another on the power of human empathy, nobly representing the United States as an essentially diverse nation. Praised by critics, pianist Heidi Louise Williams has appeared in solo and collaborative performances across North America and internationally, having won numerous awards. A graduate of Peabody, she is on the faculty at Florida State University. This is her second solo album for Albany Records.