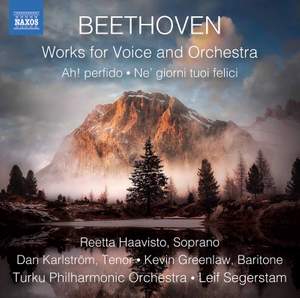 Beethoven: Works for Voice and Orchestra

The performances here, under that versatile veteran Leif Segerstam, are sprightly and assured. — MusicWeb International, February 2020

Beethoven's permanent move to Vienna in 1782 allowed him direct contact with the operatic and Italianate culture of the city. He took lessons in Italian word setting from Salieri and almost immediately began the composition of a series of arias in that language, including Primo amore, piacer del ciel and later the dramatic recitative and aria Ah! perfido. Beethoven also set strophic songs in German that form part of the popular Singspiel tradition which are genial and rare examples of his art. Leif Segerstam has said that he has a special place for Beethoven between his ears, having grown up with the composers music and conducting it frequently during his years in Vienna during the 1970s and 80s.

The performances here, under that versatile veteran Leif Segerstam, are sprightly and assured.