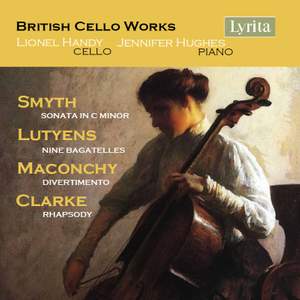 This is a fascinating quartet of cello-piano duos spanning a period of seismic shifts in music…[Smyth’s] debt to Mendelssohn and Brahms is palpable, but this is highly intuitive writing for both... — BBC Music Magazine, February 2020, 3 out of 5 stars (Performance) / 4 out of 5 stars (Recording) More…

A key figure in the British musical renaissance, Ethel Smyth was critically acclaimed for her music and writing during her lifetime. Smyth’s Sonata in C minor for cello and piano was written in 1880. The idiomatic handling of the instruments, the impressive command of form and the fluency of the melodic lines make this early work the equal, at least, of her later chamber pieces. The creative conviction of the composer Elizabeth Maconchy expressed here so eloquently, reflects her clarity of thought and strength of purpose. Her Divertimento for cello and piano was written for cellist William Pleeth and pianist Margaret Good, who gave the first broadcast performance on the BBC in 1943. The compositions of Elisabeth Lutyens are characterized by textural economy and organizational rigor. She wrote her Nine Bagatelles in 1942. The language of the work is indicative of a composer deeply connected to the music of her own era. Although Rebecca Clarke wrote most of her music in the early twentieth century, it was not until the final decades of that century that her stature was secured. Rhapsody for cello and piano is her longest and most intricate score.

This is a fascinating quartet of cello-piano duos spanning a period of seismic shifts in music…[Smyth’s] debt to Mendelssohn and Brahms is palpable, but this is highly intuitive writing for both instruments…Maconchy’s set are vividly etched miniatures, spiced with her typically angular wit and a huge range of colours…Lutyens’s more austere sketches sometimes seem to turn too tightly in on themselves…nevertheless, the rigour and economy are impressive.