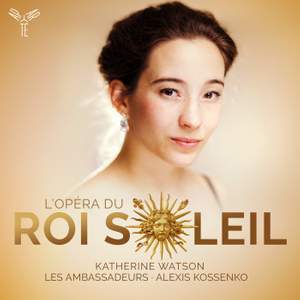 [The arias] are particularly suited to the pellucid, languid sensitivity and affecting charm of Watson’s voice, which always displays an ability to colour text with an understanding of the nuances... — Opera, February 2020 More…

Built around the young soprano Katherine Watson and suggested by the conductor and flutist Alexis Kossenko, supported by the Centre de Musique Baroque de Versailles, this operatic program revives the splendor of Versailles.

Blending operatic airs and instrumental pieces, this baroque collection offers a selection of the major works of the Sun King’s court, from André Campra to Marin Marais, but rediscovers as well several long-forgotten works from this period, as Louis de Lully’s opera Orphée.

It also allows us to glimpse into the dramatic power of the rôles tendres, that mostly suit to women in love, leading roles of the tragédie lyrique, and for which Katherine Watson proves to be the ideal interpreter. The smoothness of her timbre and the clarity of the orchestra, under Alexis Kossenko’s sure direction, reveal all the treasures of these French airs that explore the depths of the human soul.

Often exposed to torments, victims of the avarice of the gods, suffering from love and cruelty, the heroines of the tragédie lyrique nevertheless embody tragic beauty and majesty.

[The arias] are particularly suited to the pellucid, languid sensitivity and affecting charm of Watson’s voice, which always displays an ability to colour text with an understanding of the nuances of the French language rare among non-French singers… She is sympathetically supported by the period-instrument Les Ambassadeurs, who also contribute a number of orchestral extracts, played capably if without always displaying the verve one hears from the best French ensembles.

Soprano Katherine Watson, whose CD offers a selection of French arias demonstrating the art d’attendir, or rôles tenders, essentially pieces conceived to inspire tender emotions in the listener. Watson is well-equipped to do this, as her soprano is bright and fluent and she is a natural communicator. Just a dash of astringency towards the top saves the instrument from becoming saccharine.