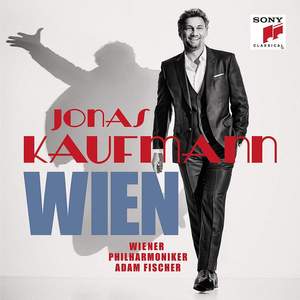 He embraces the style, the timbre, the allure, even the specific accent of this repertoire with complete conviction and self-evident delight. The great thing about these performances is that... — Gramophone Magazine, December 2019 More…

He embraces the style, the timbre, the allure, even the specific accent of this repertoire with complete conviction and self-evident delight. The great thing about these performances is that they sound ‘lived in’...There is so much to savour here – but above all it’s the stylistic understanding (and in this experience and hindsight are invaluable) that carries all before it. There is a oneness, too, with his collaborators.

In general, Kaufmann—as always— impresses with his sweet and gentle tone, the high technical finish of his singing, and his charm, but here his sense of style often feels applied rather than natural, though it’s invariably intelligently done...There are lavish accompaniments from Ádám Fischer and the Viennese orchestra.

The gloss and glamour of the Viennese musicians’ sound really is one of the glories of this new disc, and Ádám Fischer steers them with understated panache and imagination throughout. The Hungarian conductor has such a way with rubato that even long strophic songs feel like real unfolding narratives rather than just a perfunctory whirl around a gilded ballroom. Kaufmann’s subtle word-painting helps, and he keeps most of his operatic fire-power on ice for the Léhar and Strauss evergreens.

His singing of Sieczynski’s Vienna, City of My Dreams lacks the easy charm of Wunderlich, but he achieves with musicianship and artistry what came naturally to his golden-voiced predecessor...And he finds a Schubertian love of nature in the hymns to Vienna’s leafy suburbs by Leopoldi, Benatzky and May. Fischer and the Vienna Phil are deluxe accompanists.

There is enough cream and sugar in his selection of golden and silver-age serenades by Johann Strauss II and Franz Lehár to satisfy the sweetest tooth. Yet in songs such as Georg Kreisler’s satirical Der Tod, das muss ein Wiener sein, sung in a fair approximation of cabaret style by Kaufmann to Michael Rot’s wry piano accompaniment and pointedly placed as an epilogue, there’s a sharpness that interrogates wilful amnesia...The orchestral sound glistens like Cellophane.