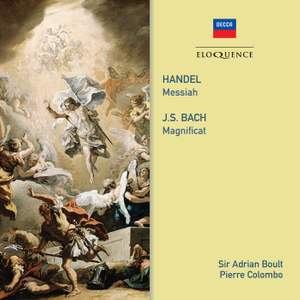 Stentorian and often ponderous, the first of Adrian Boult’s recordings of Messiah is very much of its time, though his London Philharmonic forces are captured in remarkably detailed mono sound. — BBC Music Magazine, April 2020, 2 out of 5 stars More…

2. Ev'ry Valley shall be Exalted

3. And the Glory of the Lord

5. But who may abide the Day of his Coming

6. And He shall purify the sons of Levi

7. Behold, a Virgin shall Conceive

8 & 9. O Thou that Tellest Good Tidings to Zion

10. For Behold, Darkness shall Cover the Earth

11. The People that walked in Darkness

14. There were Shepherds...And Suddenly there was with the Angel

15. Glory to God in the Highest

17. Then shall the Eyes of the Blind

18. He shall Feed his Flock

22. Surely He hath borne our Griefs

23. And with His Stripes we are Healed

27. Thy Rebuke hath broken His Heart

30. But Thou didst not Leave

32. Unto which of the Angels

36. How Beautiful are the Feet

37. Their Sound is gone out

39. Let us Break their Bonds asunder

40. He that Dwelleth in Heaven

41. Thou shalt Break them

43. I Know that my Redeemer Liveth

44. Since by Man came Death

46. The Trumpet shall Sound

47. Then shall be Brought to Pass

Sir Adrian Boult’s first Messiah for Decca, newly remastered and coupled with a rare L’Oiseau-Lyre recording of the Bach Magnificat, new to CD.

When this Messiah was released in 1954, critics were quick to recognise it as exemplifying the English oratorio tradition at its finest. Boult used a large chorus – the London Philharmonic Choir, singing with superb discipline and clarity of articulation – but he rejected both the monumental style of performance cultivated by Sir Malcolm Sargent and the anachronistic trappings of Sir Thomas Beecham’s Handel. Boult slimmed down the LPO to chamber-orchestra dimensions, though he did not neglect the oratorio’s moments of grandeur, pathos and splendour. Almost everywhere, the recorded sound belies its age. With mono this vivid and with bass frequencies this powerful, few will pine for stereo. Each orchestral section is sharply delineated: a glint of oboe timbre here, a welcome emphasis on the bottom line’s crunchy bassoon timbre there.

In fact his stereo remake from seven years later (with the London Symphony Orchestra) has a more old-fashioned feel, due at least in part to a more operatically scaled team of soloists. In 1954 Boult’s cast was led by the elegant and imperious soprano of Jennifer Vyvyan. The male soloists, too, found favour with Benjamin Britten when casting his operas; the recording is particularly valuable as a rare example on records of the artistry of the American tenor George Maran: always well-focused, assured from top to bottom of the register.

More British singers on top form may be enjoyed in the coupling, a recording of Bach’s Magnificat made in 1955 for L’Oiseau-Lyre by the London-based Kalmar Chamber Orchestra and St Anthony Singers. The Swiss conductor Pierre Colombo, little known now, presides over a rhythmically vital account, lent a further ‘period’ feel by the stylish contributions of both the countertenor Alfred Deller and the slender, pure-toned soprano member of the Deller Consort, Eileen McLoughlin. This reissue is further enhanced by a new essay by R.J. Stove, contextualising both the works and these marvellous performances.

‘Beautifully engineered sound. Balance is exceptional in all directions… [enhancing] the excellent singing of the soloists the really fine choral discipline and the responsiveness of the LPO to a conductor whom they obviously respect.’ High Fidelity, September 1954 (Messiah)

‘This is deservedly a classic among Messiah recordings.’ Gramophone, March 1961 (Messiah)

Stentorian and often ponderous, the first of Adrian Boult’s recordings of Messiah is very much of its time, though his London Philharmonic forces are captured in remarkably detailed mono sound.