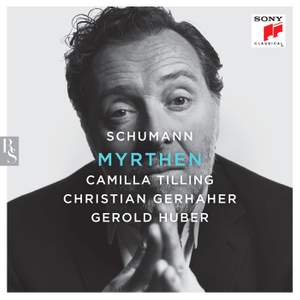 Christian Gerhaher has long been recognized as one of the foremost Lieder artists of our time. In many ways, Gerhaher’s lyric baritone and penetrating, detailed interpretations are reminiscent... — Fanfare, Jul/Aug 2020 More…

No. 21, Was will die einsame Träne

After the success of his critically acclaimed album Frage, the internationally renowned baritone, Christian Gerhaher returns with Myrthen—the second chapter of his project to record all of Schumann’s songs.

Schumann devoted his song cycle, Myrthen, to his wife Clara Schumann and gave it to her as a present on their wedding day. This year marks Clara Schumann’s 200th anniversary.

Christian Gerhaher has won numerous awards including a Laurence Olivier Award and a Gramophone Award.

Gramophone said of Frage, the first Schumann album in this project “...this is an album to treasure and to savour—and to listen to again and again.”

Christian Gerhaher has long been recognized as one of the foremost Lieder artists of our time. In many ways, Gerhaher’s lyric baritone and penetrating, detailed interpretations are reminiscent of his great predecessor, Dietrich Fischer-Dieskau. But Gerhaher is very much his own artist, and his insightful, beautifully sung, and emotionally fulfilling renditions provide unceasing pleasure.

[Tilling is] a fine singer, her soprano bright and appealing (if occasionally a little glassy), and her interpretations well-turned...And there are certainly no disappointments from the baritone, who recaptures the wonderful feeling of studied spontaneity that made the first volume of the series so special…Certainly a top choice for this wonderful cycle.

The clean-voiced Swedish soprano Tilling kicks off this lovely sequel to the award-winning Frage with a sincere, unsentimentalised Widmung, and her unaffected but eloquent delivery sits well with the Gerhaher-Huber aesthetic throughout; both singers come across especially well in the Scottish songs, though it’s Gerhaher who unobtrusively steals the show in the introspective last three numbers.

With his immaculate diction and burnished baritone, Gerhaher is incomparable in the Heinrich Heine setting Du bist wie eine Blume, and lesser-known songs to poems by Friedrich Rückert and translations of Robert Burns’s verse. Huber is always the sensitive pianist, underpinning the beauty of Tilling’s voice and Gerhaher’s interpretative genius.

Tilling’s bright, flexible sound [is] a perfect foil for Gerhaher’s honeyed warmth...Highlights dotted through the disc include Gerhaher’s performance of Byron’s Aus den Hebräischen Gesängen, with its chromatic, almost Schoenbergian piano introduction. Overall, the disc certainly maintains the standard set by the first one.