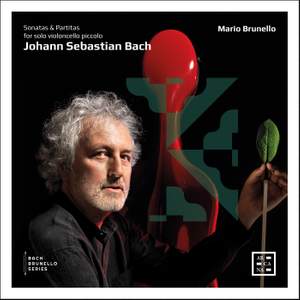 The immediate impression from the start of the first Sonata is not so much of ‘bottom up’ cello-like depth, but of a mellowness of sound enhanced by a sympathetically resonant acoustic that is... — BBC Music Magazine, March 2020, (Performance) / (Recording) More…

Since winning the Tchaikovsky Competition in Moscow in 1986, Mario Brunello has established himself as one of the foremost living cellists. An eclectic musician, for some years Brunello has also taken an interest in the world of historically informed performance practice and the rediscovery of the four-string ‘violoncello piccolo’. This instrument, slightly smaller than the cello, is known today for its presence in some sacred cantatas of Bach, but it was surely used much more widely in the seventeenth and eighteenth centuries than the currently known repertory would lead us to think.This recording of the Sonate & Partite per violino solo inaugurates the collaboration on the Arcana label with a ‘Bach Brunello Series’ of three CDs, in which important compositions for the violin from his catalogue will be performed on the violoncello piccolo. The booklet includes texts by Bach scholar Peter Wollny and Italian writer Alessandro Baricco. ‘I want to approach the Sonatas and Partitas “from the ground up”, in every sense. Violinists “fly high”, they are always on top of the melody, they see the music from above. I am therefore not proposing an imitation of the violin, but rather a specular reading, a conquest of the summit by another route. A mountain seen from the south or from the north changes the perspective, but not the substance.’ Mario Brunello

The immediate impression from the start of the first Sonata is not so much of ‘bottom up’ cello-like depth, but of a mellowness of sound enhanced by a sympathetically resonant acoustic that is utterly engaging…Some may find the phrasing at times a little willful…but others will enjoy Brunello’s lightly worn inégalitié.