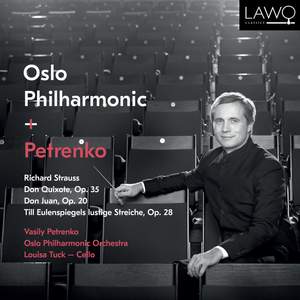 The lunatic, the lover and the joker are of imagination all infinite in these supremely vivid interpretations…Petrenko takes his time over the first unravelling of the melancholy knight’s wits…A... — BBC Music Magazine, February 2020, 5 out of 5 stars More…

Vasily Petrenko is one of the most significant and galvanizing musicians alive. He became famous for his transformative work at the Royal Liverpool Philharmonic, the oldest orchestra in the United Kingdom, where he refashioned the orchestra's sound, reconnected the organization to its home city and presided over a huge increase in ticket sales. Vasily is one of the most acclaimed classical recording artists alive and has won numerous accolades for his recordings of Russian repertoire, including two Gramophone awards. With the Oslo Philharmonic, he has recorded Shostakovich and Szymanowski concertos, Romeo and Juliet by Prokofiev, and a major cycle of orchestral works by Alexander Scriabin. This recording is the second in a series of three CDs of Strauss' orchestral works. Volume 1 was a Gramophone Editor's Choice: "There's no lack of excitement or, where needed, bombast, and the Osloers' sound at full throttle is thrilling, their playing superb." The Sunday Times said of Volume 1: "As Petrenko's tenure in Oslo begins to wind down, he revels in the standards of orchestral virtuosity he has attained with this excellent band in two Strauss tone poems that challenge all instrumental departments...the Osloers shine brilliantly." Critics have universally applauded his other recordings with the Oslo Phil: "these performances from Vasily Petrenko and Oslo Philharmonic Orchestra are top-drawer." Musicweb International "It's their performance of Prometheus, one of Scriabin's greatest achievements, that stands out." The Guardian on LWC1160 Scriabin ".....the Osloers' sound at full throttle is thrilling, their playing superb. But what makes this account so special is that it also has room for patient musicality......" Gramophone Magazine This second disc in his Straus series with the Oslo Philharmonic features Don Quixote, Op. 35; Don Juan, Op. 20 and Till Eulenspiegels lustige Streiche, Op. 28. This is an eagerly anticipated new release from these masterful musicians.

The lunatic, the lover and the joker are of imagination all infinite in these supremely vivid interpretations…Petrenko takes his time over the first unravelling of the melancholy knight’s wits…A shame the Oslo Philharmonic viola isn’t credited: this is the most golden tone I’ve heard for Sancho’s garrulousness…For this trio, there’s no better recommendation right now.

It showcases three of the composer’s most vividly pictorial works in performances shot through with the same sense of discovery and flexibility, and of conductor and orchestra thoroughly enjoying themselves...[Tuck's] playing is beautifully integrated and superbly eloquent...But it’s largely Petrenko’s conviction that makes the performance so special, with no bar allowed simply to play itself, the music’s descriptiveness vividly but never doggedly conveyed.

Louisa Tuck and Catherine Bullock are both superb in this brilliantly played account.