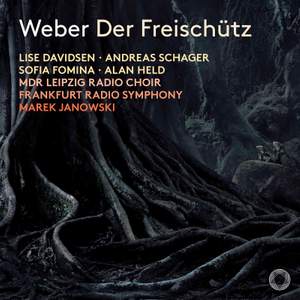 It is carefully done, and due attention is paid to Weber’s inventive score, but the result is frankly pedestrian…There’s good singing here, led by Lise Davidsen’s sweet-toned Agathe, who sings... — BBC Music Magazine, February 2020, 3 out of 5 stars (Performance) / 4 out of 5 stars (Recording) More…

Maestro Marek Janowski leads a sensational cast — including star vocalists Lise Davidsen and Andreas Schager — on this new recording of Der Freischütz, the German Romantic opera par excellence. In the years after its 1821 premiere, the catchy melodies, picturesque charm and spooky scenes of Der Freischütz thrilled audiences throughout Europe. Janowski’s inspired reading lifts out the symphonic qualities of Carl Maria von Weber’s masterpiece, and makes clear why colleagues such as Hector Berlioz and Richard Wagner raved about the work.

Marek Janowski is one of the most celebrated conductors of our times, and enjoys a vast PENTATONE discography, including complete recordings of Bruckner’s symphonies and Wagner’s mature operas. Frankfurt Radio Symphony has also released multiple albums on PENTATONE, including a recording of Richard Strauss’s Salome (2017).

It is carefully done, and due attention is paid to Weber’s inventive score, but the result is frankly pedestrian…There’s good singing here, led by Lise Davidsen’s sweet-toned Agathe, who sings her aria ‘Leise, Leise’ as if she really means it. Sofia Fomina is a perkily happy Ännchen.

a large modern orchestra plays with all the colour and varying tonal weight of an informed period band...The cast features the much-discussed new star Lise Davidsen as an Agathe of one’s dreams – the voice sounding fuller and more secure at the bottom than on her debut recital album...Andreas Schager is Max, with just the right amount of Helden to lyric in the voice. Fomina is a spicy and unpredictably colourful Aennchen, Held a less black and weighty but characterfully rich villain Caspar.

With plenty of bucolic bite, Janowski's orchestra conjures a real Brothers Grimm atmosphere in Weber's dark fairy-tale. The Wagnerian voices of the two leads are flatteringly recorded: Davidsen is a womanly, three-dimensional Agathe, her big dusky soprano still flexible enough to navigate the florid passages of her first aria, whilst the heroic writing for Max holds no terrors for Schager, a veteran Siegfried.

[Davidsen] gives her finest performance to date, both arias sung with a big, radiant voice, but always lyrically...She is well matched by Sofia Fomina’s perky Ännchen...Janowski conducts Weber’s masterly score with atmosphere and the choir are thrilling in the Huntsmen’s Chorus.

Andreas Schager’s Max is strong if a little wobbly these days, and Alan Held rants and raves enjoyably as Kaspar. Soﬁa Fomina is a bright-toned Ännchen, vivacious but not annoying. [Lise Davidsen] Her voice is caught better in this recording than in her debut Decca recital earlier this year, and instead of it sounding as though she sits on a note before adding vibrato, it sounds more ‘live’, as though the voice takes a moment to bloom. Add radiant tone, beautiful legato and some luminous higher notes, and it is a triumph.