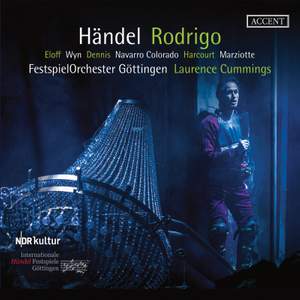 At its best, the music of Rodrigo has an invigorating freshness, its raw, sometimes gawky energy tempered by an Italianate melodic suavity that Handel had honed in his cantatas...Cummings directs... — Gramophone Magazine, December 2019 More…

For a long time, a large portion of Handel’s early opera Rodrigo was thought to have been lost. It was not until 1974 that the printed libretto turned up again and nine years later the third act was found in the Earl of Shaftesbury’s Handel collection. On August 29, 1984, finally, the work was revived during the Innsbruck Festival of Early Music and in 2019 it’s on the programme at the Göttingen International Handel Festival.

The opera narrates a freely adapted version of the end to the regency of the Last Visigoth King Roderich. In the libretto by Francesco Silvani, however, the reason behind it is less the lust for power on the part of his opponents than the thirst for vengeance of his spurned mistress. It was back in 1707 in Rome that George Frideric Handel wrote Rodrigo.

At its best, the music of Rodrigo has an invigorating freshness, its raw, sometimes gawky energy tempered by an Italianate melodic suavity that Handel had honed in his cantatas...Cummings directs his expert band of Handelians with more theatrical flair and rhythmic brio than [Alan] Curtis.

If you want a truly complete Rodrigo it is Cummings you will need...As so often with Göttingen the most notable aspect of the performance is the outstanding playing of the FestspielOrchester.

It positively bounces along under Laurence Cumming’s direction, so although it’s almost three hours of music, it zips past: the benefit of a live recording is particularly apparent in the recitatives, which crackle. Three sopranos provide a feast of wonderful singing.