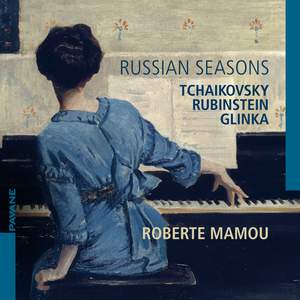 Rubinstein, A: Soirees a Saint-Petersbourg. Op. 44: No. 3. Preghiera

Rubinstein, A: Miscellaneous Pieces, Book 4, Op. 93: Barcarolle No. 5 in A minor

Glinka: A farewell to St Petersburg: No. 10 (The Lark)

I. January, by the Hearth

III. March, Song of the Lark

VII. July, Song of the Reaper

XI. November, On the Troika

’Russian Seasons’ is the new album of the colourful multi-faceted pianist Roberte Mamou, nicknamed the Poetess of Sound when she was awarded the Diapason d’Or for her recording dedicated to Cimarosa. The album features works by Tchaikovsky, Rubinstein and Glinka.

This album is an inner journey that goes from melancholy to uncontrolled exaltation.

The works included on the album demonstrate this to perfection and tell us about nostalgia, melancholy and tenderness carried away by the passion and excessiveness of an exquisite sensibility.

Roberte Mamou has crafted a significant career as a soloist, a chamber music player and a teacher. Her solo, chamber and concerto recordings are acclaimed worldwide.

Roberte Mamou is closely involved in a number of festivals: having founded the chamber music series “Musica Reservata” in Knokke in Belgium, she remains its artistic director; she was closely involved in the Mozart Festival in Lille (which organises 100 concerts a year), the international “Prinsenhof “ chamber music festival in Bruges, and, since 1995, the international festival in Tunisia, “Octobre Musical de Carthage”. Her many solo recordings, as well as those of chamber and orchestral music, have received wide critical acclaim and a number of awards.