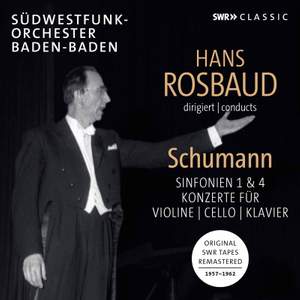 More of the art of this great conductor reclaimed. — MusicWeb International, February 2020

Hans Rosbaud was one of the few great conductors in his time who hardly performed outside Germany Switzerland and France but nevertheless gained international reputation, with a virtually legendary status. And with good cause: he had conducted more often in Anglo-Saxon countries and made more records than his peers, and today is considered one of the most important musicians of the 20th century. This first edition presents most of Rosbaud’s recordings with the former symphony orchestra of the broadcasting corporation Sudwestfunk in Baden-Baden, his main ensemble from 1948 until his death, which due to his meticulous rehearsal practice became one of the best European orchestras of the 1950s. Half a century after his death, this edition aims to make Hans Rosbaud known beyond the circle of music experts as one of the great maestros.

More of the art of this great conductor reclaimed.