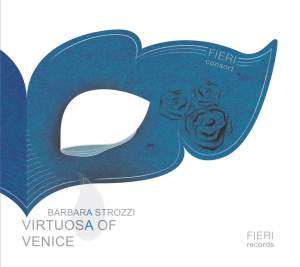 Show 10 remaining works on this recording

Hide 10 works on this recording

Barbara Strozzi was one of the most prolific composers of her time, not a small achievement for a woman working in a man’s world. Fieri takes you to 17th-century Venice, offering this glimpse into Strozzi’s life as a daughter, hostess, mother, and composer. Strozzi experienced a liberal education and unique access to the finest artistic and intellectual minds of Italy, such as Claudio Monteverdi, Nicolò Fontei and Benedetto Ferrari whose music also features on this disc. During her lifetime she enjoyed love but suffered loss and this is reflected in the legacy of her music.

The collection presented on this album demonstrates Strozzi’s wide-ranging style, from the innocent flirtation of her first book, ‘I baci’ and ‘ Il ritorno’, through witty comedy in ‘Al battitor al bronzo’, to her later publications, the seductive duets ‘Begli occhi’ and ‘Morso e bacio’, and finally her beautiful and moving laments ‘Lagrime mie’ and ‘L’eraclito amoroso’.

With elegance, charm, and excellent Italian, the female voices balance emotion with admirable control, while the tenors push expression uncomfortably close to the edge.

The Fieri Consort offer a glimpse into the sophisticated union of poetry and harmony that the Venetian created for her performances at the Accademia degli Unisoni...The singing has highly effective clarity and sincerity, and is accompanied with tasteful discretion and precision by a revolving continuo trio.