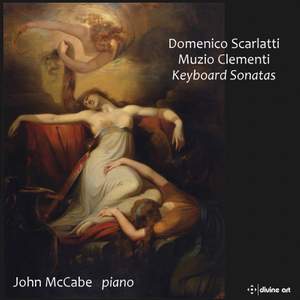 Wonderful to see John McCabe finally being recognised as a pianist. Recorded on a Bösendorfer in 1981, the sound of these revelatory Scarlatti and Clementi sonatas is astonishingly present. Witty,... — International Piano, December 2019 More…

John McCabe (1939-2015) was renowned as both a pianist (a Haydn specialist and supporter of many contemporary composers) and as a composer in his own right of very fine music in several genres. This double album was created form two vinyl LPs issued by Hyperion in 1981 and shows McCabe as a first-class interpreter of the baroque and early classical sonata styles, here brought together. Domenico Scarlatti, an exact contemporary of Handel and JS Bach though living a few years longer, is probably the most renowned and certainly the most prolific of composers of the (usually single movement) keyboard sonata, more traditionally played on harpsichord. A hundred years later, pre-eminent among others, Clementi developed the classical piano sonata, introducing sustain and other dynamic effects available to the fortepiano, being produced by his family company among others. Both sets of works also translate very well to the modern concert grand.

Wonderful to see John McCabe finally being recognised as a pianist. Recorded on a Bösendorfer in 1981, the sound of these revelatory Scarlatti and Clementi sonatas is astonishingly present. Witty, affectionate booklet notes complete an indispensable release.

This 1967 recording (from McCabe’s first-ever album) is not only played with great power, but also with a composer’s unique awareness of sonority. I have yet to hear another pianist equal McCabe’s strength and color in that work...effortless playing.