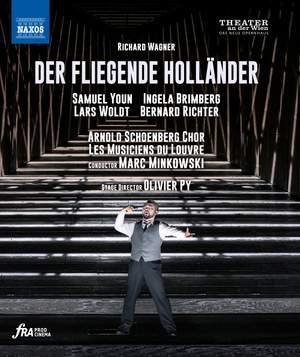 Minkowski sounds totally at home in this ‘Romantische Oper’, pacing the drama unerringly without sacrificing spontaneity of phrasing. The orchestral playing...has all the warmth and impulsiveness... — Opera, June 2020 More…

Der fliegende Holländer is considered to be the first ‘true’ Wagner opera. The story of the phantom ship and its haunted master becomes a sensually charged drama with love and tragic sacrifice at its heart, and this original 1841 version leaves the ultimate redemption of its central characters unresolved. Wagner originally conceived the opera for Paris, so it is fitting that this production from the Theater an der Wien is driven by French director Olivier Py’s unique vision, with a staging that dispels many of the misconceptions surrounding Wagner’s art.

Minkowski sounds totally at home in this ‘Romantische Oper’, pacing the drama unerringly without sacrificing spontaneity of phrasing. The orchestral playing...has all the warmth and impulsiveness the work requires, while the period instruments guarantee a lightness of texture that here helps Minkowski maintain an appropriate sonic balance between stage and pit...Brimberg has the shining voice that we associate with the best Swedish sopranos, plus considerable technical skill and psychological insight.