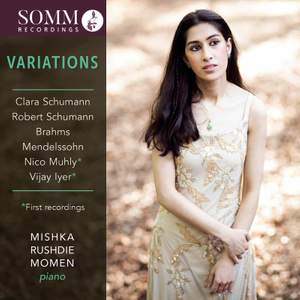 Schumann: Impromptus on a Theme by Clara Schumann, Op. 5

II. Serene but Firm, with a Steady Pulse and Flowing 16ths

Pianist Mishka Rushdie Momen talks to David about her debut recording, which draws together a variety of musical responses to a theme by Schumann and includes world premieres by Vijay Iyer and Nico Muhly.

Making an impressive solo debut on SOMM this month is the young, fast-rising pianist Mishka Rushdie Momen. No stranger to SOMM, she joined two of today’s finest pianists – Valerie Tryon and Peter Donohoe – in Mozart’s dazzling Piano Concerto for Three Pianos, K242 in 2018. Mishka studied with Joan Havill, Richard Goode and Imogen Cooper and was mentored by Sir András Schiff, who presented her in recitals throughout Europe and in New York for his acclaimed Building Bridges series. This superbly realised recital includes Variations by Robert and Clara Schumann, Brahms and Mendelssohn, and first recordings of two new works, specially commissioned by Mishka for this recording, by Nico Muhly and Vijay Iyer. A single theme from Robert Schumann’s Bunte Blätter is the prompt for completely different, sometimes opposing, sets of musical mutations, the result as exciting as it is intriguing. A birthday gift for her husband, Clara Schumann’s Variations on a Theme of Robert Schumann are “an outpouring of generosity and love” that inspired Brahms’s Op.9 Variations (Op.9), which Rushdie Momen describes in her booklet notes as “one of his most intimate and personal expressions”. The “burst of harmonic and rhythmic invention” that are Robert Schumann’s Op.5 Impromptus, and Mendelssohn’s “concise, rigorously constructed” Variations sérieuses were both modelled on Beethoven’s Eroica Variations. Completing a recital brilliantly illustrating Rushdie Momen’s conviction that “the possibilities of the variation form seem infinite” are two world premiere recordings: Nico Muhly’s Small Variations – “a five-minute chorale with an explosion halfway through it” – and Vijay Iyer’s Hallucination Party, a “fever dream” packed with surprises. A Guildhall School of Music and Drama graduate, Mishka Rushdie Momen is also a committed chamber musician who has partnered Steven Isserlis, Midori and members of the Endellion, Belcea and Artemis String Quartets.