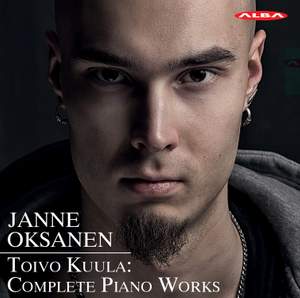 A most welcome disc, which has spent a lot of time in my CD player and has given me much enjoyment. — MusicWeb International, March 2020

On this new Alba album the young and talented Janne Oksanen takes over the entire piano output of Toivo Kuula. To this day Toivo Kuula (1883-1918) stands as one of the most significant Finnish composers. His music is poetic, epic and deep and it showcases a very sophisticated musical taste and tonal language. In his lifetime he was hailed as Finland’s finest composer after Sibelius, who was his mentor and friend. As a whole these 20 pieces portray a versatile palette of different stages of Kuula the composer, from teenage sketches (Air varié) to impressionistic frames from Paris (Satukuva no 2). In general, the music is mostly lyrical, with reoccurring themes such as nature, pathetique and ruthlessness. Janne Oksanen (b. 1994) played his first recital at the age of 15 and since then he has performed as a soloist and chamber musician widely in Finland as well as in Europe and USA. In February 2018 he performed the complete works of Toivo Kuula in Sibafest, Helsinki Music Centre. Oksanen has been successful in various national and international competitions. In Spring 2016 he received the Bachelor’s Degree in Piano Performance. He is currently studying in the Master’s Program in Sibelius Academy with Risto-Matti Marin. In 2014-2015 he studied in Conservatoire de Paris with Denis Pascal. Oksanen debuted as a conductor in Sarah Devoyon’s Master Recital with Lalo Cello concerto. He composes his own music and has arranged Sibelius’ Finlandia for 2 pianos.

A most welcome disc, which has spent a lot of time in my CD player and has given me much enjoyment.