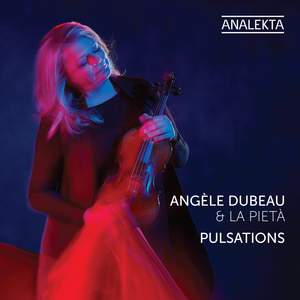 Arnalds: Happiness Does not Wait

Jóhannsson, J: The Theory of Everything Suite

Richter, Max: In The Garden

One of the most prominent violin virtuosos of her generation, Angèle Dubeau has been leading an exceptional career, performing in the greatest concert halls of the world. While her virtuosity and musicality have seduced critics, the public has adopted Dubeau for her uncommon gifts as a communicator and her outstanding ability to connect with them. Angèle Dubeau founded La Pietà in 1997, an all-female string orchestra featuring some of Canada’s best musicians. She has garnered many awards over the years, and she is one of the rare classical violinists in the world to have been awarded gold records. “A pulsation marks time, it infuses its rhythm in it and also evokes the heart. Just like those composers whose music calls out to me and who, with their unique signatures, mark time, our time; Olafur Arnalds, Jean-Michel Blais, Ludovico Einaudi, Alex Baranowski, Craig Armstrong, Peter Gregson, Yann Tiersen, Abel Korzeniowski, Johan Johannsson, Max Richter, Dalal...”