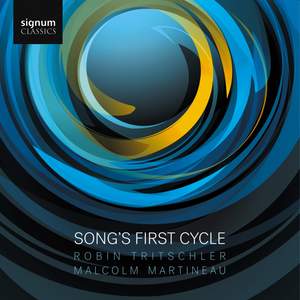 These polished and moderate accounts suit the Mozart beautifully, but leave me wanting greater emotional rawness in the Beethoven, more humour and vulgarity in the Weber and more drama in the... — BBC Music Magazine, December 2019, 4 out of 5 stars More…

Wo die Berge so blau

The creation of the ‘song cycle’ as a new art form in the early 19th Century was paved with musical experiments and innovations. On this disc, Tritschler and Martineau illustrate the progress made by the great Lied composers of the day toward the cyclical perfection finally achieved by Beethoven and Schubert and since emulated by Schumann, Loewe, Wolf, Fauré, Britten, Shostakovich and so many others.

A song cycle is distinguishable from a collection of songs or a Liederspiel by some type of interior cohesion: a unifying theme, text from a single source, a narrative; Tristchler and Martineau received critical acclaim for their first record of songs released on Signum, ‘No Exceptions. No Exemptions’. It could be a musical connection: recurring devices and motifs, key relationships between songs, or perhaps a fixed performance order. Usually, a combination of these criteria is necessary to bestow on any song collection the title of song cycle.

These polished and moderate accounts suit the Mozart beautifully, but leave me wanting greater emotional rawness in the Beethoven, more humour and vulgarity in the Weber and more drama in the Schubert. But despite lacking a little bite and clarity in his consonants, Robin Tritschler’s sweet-toned voice is a continual delight, as is Malcolm Martineau’s sparkling, pearly, luminous piano sound.

Tritschler sings his programme as eloquently as he writes about it. Pride of place inevitably goes to the Beethoven, where he combines something of Fritz Wunderlich’s warmth with Christian Gerhaher’s altogether darker introspection, and is beautifully alert to the cycle’s constant shifts of emotion and mood...He and Martineau, meanwhile, very much form an equal partnership, and you get a real sense of almost instinctive give and take between them.