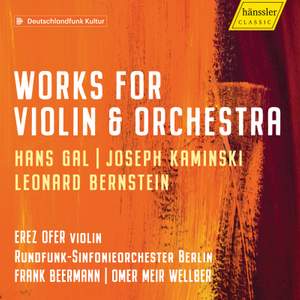 A convincingly balanced diptych, the Concertino is continuous and a melodic delight from first bar to last…Erez Ofer has just the right touch for his lovely work…Omer Meir Wellber takes up the... — Gramophone Magazine, Awards Issue 2019 More…

The present programme offers music for solo violin and orchestra by three 20th-century composers who share a common feature in their Jewish origins. Two of them suffered the consequences of Nazi repression in pre-war Germany. Born in the Austro-Hungarian Empire, the composer, musicologist and music theoretician Hans Gál (1890-1987) was obliged to resign his post as Director of the Mainz Conservatory after the National Socialists came to power in 1933 on account of his Hungarian Jewish ancestry. He returned to Austria but had to leave when Hitler’s Germany annexed his homeland in 1938. He went to England and spent the rest of his life there. Joseph Kaminski (1903-1972) was born in Odessa. His parents, who were Jewish actors, then moved to Warsaw with their family. The musically talented boy began playing the violin at six and at the age of 12 he was already playing as a soloist with the Warsaw Philharmonic Orchestra. He moved to Berlin in 1922 and studied at the College of Music there (winning high praise from Berlin music critics), then to Vienna (1924), where he continued his studies with Hans Gál and others. He emigrated to Israel in 1937, where he joined the Palestine Orchestra (renamed the Israel Philharmonic Orchestra in 1948) as lead violinist. The third composer on this album, Leonard Bernstein (1918-1990), had a very different start in life. The son of Jewish immigrants to the United States, he was born in Massachusetts in 1918. “Lenny” – as the world knew him – rose in the USA and then around the world to be a musical superstar.

A convincingly balanced diptych, the Concertino is continuous and a melodic delight from first bar to last…Erez Ofer has just the right touch for his lovely work…Omer Meir Wellber takes up the baton for the final work, a sparkling rendition of Bernstein’s brilliant Serenade after Plato’s ‘Symposium’…With superb sound, strongly recommended.

Throughout the album soloist Erez Ofer...is in sparkling form playing with style and assurance...The RSO Berlin plays superbly... engaging from start to finish.