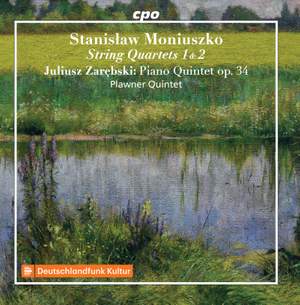 For me, the real discovery here is the Piano Quintet by Juliusz Zarębski (1854–1885). This I will tell you point blank: Zarębski’s quintet alone is worth the price of the disc and then some.... — Fanfare, January/February 2020 More…

While the music world is getting ready for next year’s 250th anniversary of Ludwig van Beethoven’s birth, this year’s bicentennial of the birth of the Polish national composer Stanislaw Moniuszko has gone practically unnoticed outside Poland. For this reason, this new recording of his two string quartets is all the more welcome. The composer who would become the celebrated master of the operas Halka and The Haunted Manor wrote these quartets during or shortly after his Berlin study years and in a style continuing to draw on the vocabulary of classical models. At the same time, the twenty-year-old student displays a sense of humor, melodicism, and chamber finesse that not only make for a genuinely rewarding listening experience but also are worth hearing again and again. A “late” creation by Moniuszko’s young fellow Pole Juliusz Zarebski is being presented here together with the quartets. At the end of his life this favorite pupil and confidant of Franz Liszt wrote an absolutely “avant-garde” piano quintet that might have launched a bold and daring oeuvre but ended up serving as a farewell: when this virtuoso pianist and composer delighting in experiment died in 1885, he was a mere thirty-one years old.

For me, the real discovery here is the Piano Quintet by Juliusz Zarębski (1854–1885). This I will tell you point blank: Zarębski’s quintet alone is worth the price of the disc and then some. I haven’t the slightest hesitation to label this four-movement, 34-minute, sweeping Romantic score a masterpiece…if chamber music matters to you, Zarębski’s Piano Quintet is a compulsory purchase