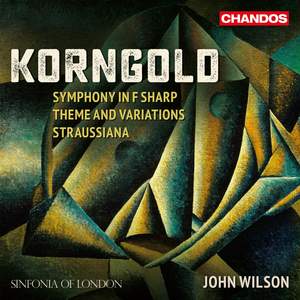 The playing of the Sinfonia of London is astonishingly brilliant, with Hollywood-dream glories in the string tone. — BBC Music Magazine, November 2019 More…

Interview,  John Wilson on the Sinfonia of London

The British conductor talks to James about his new ensemble and their first two recording projects of music by Korngold plus a selection of French orchestral works.

John Wilson and the Sinfonia of London show their impressive credentials when it comes to the music of Korngold, with a thrillingly-performed account of the Symphony in F sharp.

John Wilson and his Sinfonia of London shine in an all-Korngold programme full of wit, romanticism, sensitivity, and virtuosity – an orchestral tour de force! Conductor John Wilson has earned a reputation for his interpretations of British and American repertoire in particular. He is a favourite of many of the UK’s orchestras and festivals including the BBC Proms and Aldeburgh Festival and is currently Associate Guest Conductor of the BBC Scottish Symphony Orchestra. John is also in demand across the world at the very highest level, conducting the major orchestras of Sydney, Berlin, Budapest, Amsterdam, Oslo amongst many others, and has a large and growing discography, covering a wide range of repertoire.

The playing of the Sinfonia of London is astonishingly brilliant, with Hollywood-dream glories in the string tone.

[Symphony] I come away feeling this is the first recorded version which gets the pace right. [Theme & Variations] Wilson does a lovely job with it, as he does with the brief, entirely Viennese homage of Straussiana. This is a wonderful addition to the catalog and a genuine corrective to the gloom-ridden, priestly way with which conductors have approached the symphony. Bruckner might be unhappy. But I’m sure Errol Flynn would approve!

The main work is the Symphony in F sharp, and right from the start, with brooding, restless chords from bassoons, marimba, piano, and strings, it's clear that Wilson is alive to the nuances of Korngold's orchestration...Although of course this isn’t actually a disc of film music, the Hollywood sheen of the strings is highly pleasing...If this impressive offering is the debut of his new ensemble, then I can't wait to hear what delights they have planned for the future!

This first album is a promise of great things to come….The symphony emerges as a near-masterpiece in his flexible hands, fabulously played by the musicians...The Johann Strauss pastiche is huge fun, brilliantly orchestrated. More, please.

Wilson sets an alarmingly fast speed in the scherzo, his newly reconstituted Sinfonia of London rising to the challenge with ease. The big horn theme has never sounded better; it’s a glorious moment.