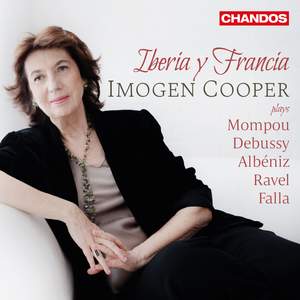 It is difficult to imagine Debussy-playing more personal, suggestive or voluptuous. Cooper has lived with this music long and well…She gives us an Albéniz entirely her own, all the more vivid... — Gramophone Magazine, October 2019 More…

On this release Imogen Cooper explores the links between French and Spanish styles in a programme ranging from Albéniz to Mompou via Debussy, Ravel, and Falla. Regarded as one of the finest interpreters of Classical and Romantic repertoire, Imogen Cooper is internationally renowned for her virtuosity and lyricism. Recent and future concerto performances include the Berliner Philharmoniker and Sir Simon Rattle, Sydney Symphony with Simone Young and the BBC Scottish Symphony Orchestra with Thomas Dausgaard. Imogen has a widespread international career and has appeared with the New York Philharmonic, Vienna Philharmonic, Royal Concertgebouw, Leipzig Gewandhaus, Budapest Festival, NHK and London Symphony Orchestras. Her recital appearances have included Tokyo, New York, Singapore, Paris, Vienna, Prague and the Schubertiade in Schwarzenberg.

It is difficult to imagine Debussy-playing more personal, suggestive or voluptuous. Cooper has lived with this music long and well…She gives us an Albéniz entirely her own, all the more vivid perhaps for its vantage from the outside looking in. Piquant, understated, with a sultry heat that smoulders rather than bursting into flame, these are compelling performances informed by the palette of Goya and undergirded with an inerrantly zesty rhythmic élan.

A favourite from this recital disc is her account of Debussy’s L’isle joyeuse, played with crystalline precision and dreamy freedom.