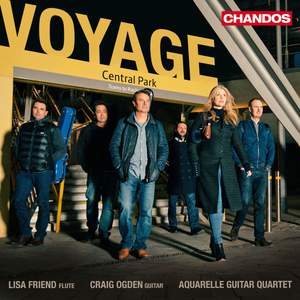 Lisa Friend gives us an apt whiff of sensuality in the opening ‘Bordello, 1900’, while maintaining the requisite fin de siècle decorum…The remainder of the programme is a pleasantly varied mix... — Gramophone Magazine, Awards Issue 2019 More…

Ibert: Entr'acte for flute (or violin) & guitar (or harp)

Shostakovich: Waltz from 'The First Echelon'

Lisa Friend leads this collection of original works and transcriptions for flute and guitars, joined by Craig Ogden and the Aquarelle Guitar Quartet. The wide-ranging programme includes Fauré’s Pavane and Rachmaninoff’s Vocalise. Lisa Friend (Flautist) has appeared as a soloist with the Philharmonia Orchestra, City of Prague Philharmonic, Virtuosi Pragenses Chamber Orchestra, Royal Liverpool Philharmonic Orchestra, Oxford Philharmonic and has toured throughout much of Europe, Asia and the USA. Lisa has recorded as a solo/chamber artist for Silva Screen, Universal, Chandos, Champs Hill and Signum Records. Her previous album 'Essence' has been aired on Classic FM, BBC Radio 3, BBC Radio London, WQXR Classical Radio, New York and WFMT Radio, Chicago.

Lisa Friend gives us an apt whiff of sensuality in the opening ‘Bordello, 1900’, while maintaining the requisite fin de siècle decorum…The remainder of the programme is a pleasantly varied mix of lyrical, mostly well-known miniatures…A lovely recital, all in all, and very prettily recorded.