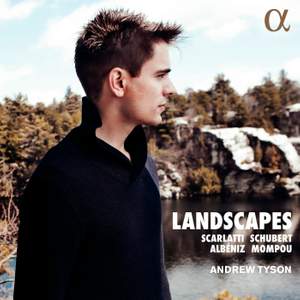 After releasing two recordings – the first devoted to Chopin (ZZT 347) and the second to Ravel and Scriabin (ALPHA 277) – and winning First Prize at the Géza Anda Competition in 2015, which gave his career a powerful momentum, the young American pianist Andrew Tyson has conceived a new tailor-made programme of music by Domenico Scarlatti, Schubert, Mompou and Albéniz. His programme focuses on landscapes, starting out from Federico Mompou’s piece of that name (Paisajes) and taking us on a journey elsewhere in Spain (sonatas by Domenico Scarlatti, Book of Iberia by Isaac Albéniz), the Austrian countryside (where Franz Schubert composed the Sonata in A Major D664.

Imagine Cyprien Katsaris fuelled by extra caffeine, or Joh Cleese’s wild comedic brain welded to Benjamin Grosvenor’s staggering, utterly inborn keyboard gifts, and you’ll understand what Andrew Tyson is about. You listen to the Scarlatti sonatas not for grace and insouciant style but rather to ponder just what Tyson will do next…Perhaps the sensuous Mompou pieces benefit most from Tyson’s free-spirited style and boundless tonal resources.

Invigoratingly played, this sequence is formed around sonatas by Scarlatti...There’s a beautiful account of Schubert’s Sonata in A, D664, and the Spanish theme is clinched by Book I of Albeniz’s Iberia.

Tyson’s playing in the Scarlatti is crisp and incisive, his Schubert buoyant and unburdened by melancholy, his Albéniz poetic and seductive.