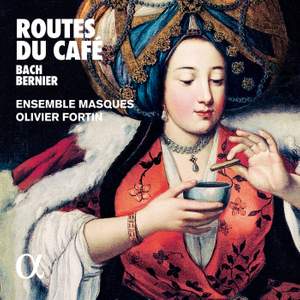 The history of coffee is fascinating! From the opening of the first establishments in Constantinople in the middle of the sixteenth century to the appearance and diffusion of the drink in Europe in the following century, coffee and coffee houses were highly fashionable. Two composers devoted a cantata to the topic. Gottfried Zimmermann opened his famous coffee house in Leipzig in 1715 and organised concerts there. Around 1735, Bach composed his famous cantata Schweigt still, plaudert nicht , which was probably performed there. It depicts the humorous dispute between a father and his daughter over her consumption of coffee. In Paris, Nicolas Bernier’s cantata Le Caffé (1664-1734) praised the beverage and its many virtues. The ‘Coffee Road’ Olivier Fortin has mapped out here makes a detour to London around 1660, where the composer Matthew Locke frequented the Turk’s Head Coffee House and promoted a string fantasia.

Fortin has chosen to organise this album like a fasil, a ‘suite of pieces’ in traditional Ottoman music, with taqsims (improvisations) interspersed among the compositions and played on such instruments as the ney flute, the Arab violin and the yayli tanbur.

The playing of Ensemble Masques is suitably lip-smacking, Anna Besson’s flute nicely in the foreground sharing the limelight with Hana Blažíková’s pert soprano in Bernier’s frothy cantata...The Turkish numbers percolate vivid oriental colour...Imaginatively programmed, beautifully played and recorded, this is disc is as delightful as a cup of the black gold itself.