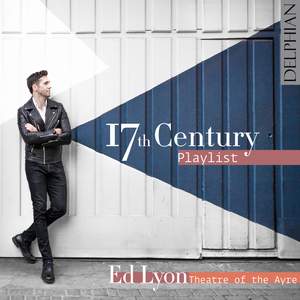 Theatre of the Ayre

Ed Lyon sings all three languages with great clarity and alertness to the sense of the words, ornaments his line idiomatically and displays an appealing ease and evenness of voice production... — BBC Music Magazine, December 2019, 4 out of 5 stars More…

Lanier: No more shall meads be deck'd with flow'rs (Love's constancy)

The English tenor talks to Katherine about his debut solo album of songs by Landi, Dowland, Lambert, Cavalli and more with Theatre of the Ayre, released tomorrow on Delphian.

Tenor Ed Lyon has been one of the UK’s most versatile and sought-after soloists for over a decade. Now, for Delphian, comes his first solo recording project, inspired by the immediacy, joy and freedom found in seventeenth-century music. Joined by Theatre of the Ayre – a flexible and innovative ensemble led by the lutenist Elizabeth Kenny – he has conceived his very own ‘playlist’: a live mixtape of the songs, simultaneously catchy and sophisticated, which became earworms for the listeners of their day.

Ed Lyon sings all three languages with great clarity and alertness to the sense of the words, ornaments his line idiomatically and displays an appealing ease and evenness of voice production across all registers.

It’s a lovely concept – an album of the 17th century’s greatest hits, where only the catchiest, most irrepressibly infectious dances and the swooniest ballads need apply...There’s a real sense of musical camaraderie here – of spontaneous conversations and mutual enjoyment of skill...Lyon has put together a wonderfully wide-ranging programme but it’s the French repertoire where he really shines.

This lovingly-crafted debut album from the English tenor is easy listening in the most positive sense – though most of the material here was new to me, several of the songs wormed their way into my consciousness after a single hearing, and Lyon approaches them from a standpoint of sound historical awareness spiced with the odd audacious anachronism. Recommended for casual listeners and early music aficionados alike.

One of the year’s most enjoyable discs...Part of the charm, Lyon’s versatile singing aside, is the rich accompaniment...Switching with agility between French, Italian and English, he gives each track distinct character and spirit. One for any baroque fan’s Christmas list.