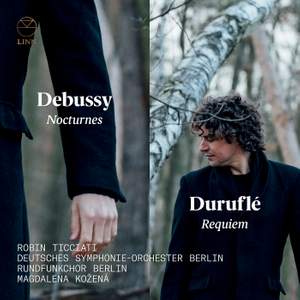 Ticciati’s performances are relaxed and lyrical, and recorded in splendid sound. Taking the Duruflé first, the sound opens up impressively in the big moments, with exhilarating climaxes in the... — Fanfare, March/April 2020 More…

The conductor talks to Katherine about his third recording of French repertoire with the Deutsches Symphonie-Orchester Berlin, which pairs the Duruflé Requiem with Debussy's Nocturnes.

Released to coincide with his third season as Music Director of the Deutsches Symphonie-Orchester Berlin, Robin Ticciati has forged a close and highly successful partnership with his orchestra.

• This, his fourth recording with DSO Berlin, continues his series of music by French composers (Debussy, Fauré, Ravel, Duparc) with a significant move into choral music: the Duruflé Requiem.

• Ticciati is joined by mezzo-soprano Magdalena Kožená, who has performed Debussy’s Ariettes oubliées and Duparc songs on previous DSO recordings, and the Grammy award-winning Rundfunkchor Berlin.

• Written in response to Fauré’s own Requiem and with Debussy’s influence paramount, Duruflé created one of the most significant sacred works of the twentieth century.

• Ticciati describes this masterpiece as “a balm for the soul, a score filled with tremendous hope and peaceful searching”.

• Most typically recorded with organ accompaniment, Ticciati has chosen to record Duruflé’s own orchestrated version which allows the conductor to create a unique blend of choral and orchestral colours recalling the sound-world of Debussy and the Impressionists.

Ticciati’s performances are relaxed and lyrical, and recorded in splendid sound. Taking the Duruflé first, the sound opens up impressively in the big moments, with exhilarating climaxes in the Domine Jesu Christe and Sanctus.

For two works so diametrically opposed in feeling, philosophy and belief, these marvellous pieces sit well together. They also appear to chime with Robin Ticciati’s very particular sensibilities as a conductor. And he plainly adores them…Singing and playing strike me as excellent and this spiritual embrace of a piece is engineered to Linn’s highest standards.

Kožená's coppery tones stand in welcome contrast to the mellifluous sounds of milk and honey dominating Duruflé’s Requiem. Ticciati’s handling of the Deutsches Sinfonie-Orchester and the Rundfunk Choir Berlin is uniformly suave, although the most striking aspect of this release is its juxtaposition of works.