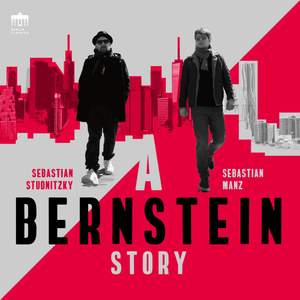 I. Grazioso (Arr. S. Manz and S. Studnitzky for clarinet and piano)

I. Clubhouse Fanfare (Arr. S. Manz and S. Studnitzky for clarinet and piano)

II. Rise Against the Walk (Arr. S. Manz and S. Studnitzky for clarinet and piano)

Music pervaded by so many different influences, modern and yet rooted in tradition, assiduous and extremely cool. A Bernstein Story is an album which deals with Lenny's music the same way in which he dealt with music itself: without being frightened to cross borders or snub someone. Classical Clarinettist Sebastian Manz and jazz musician Sebastian Studnitzky approach the great Leonard Bernstein in a way that illuminates every facet of his career and life.

The two musicians have come to Bernstein in their own individual ways and from their respective fields: Manz as the classically trained artist, Studnitzky as a jazz man. The album they have produced, A Bernstein Story, is meant to mirror the composer himself: remote from any formal categorization, pluralistic in style, eclectically colourful, located somewhere between classical and jazz.

Jazz pianist and classical clarinettist join forces in new interpretations of music by Bernstein, Stravinsky and Reich. An unexpected delight.