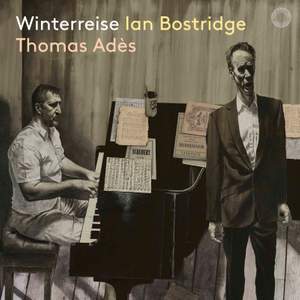 Even Bostridge’s sometimes jarring crescendos sound as bleak cries from the hollowed soul. There is a terrifying icy detachment in Adès’s evocative touch. Above it, Bostridge’s weary wanderer... — BBC Music Magazine, December 2019, 5 out of 5 stars More…

Recording of the Week,  Winterreise from Ian Bostridge and Thomas Adès

Fifteen years on from his first audio recording of the work, the British tenor retraces Schubert’s 'Winter Journey' with a new companion in an unsettling, unsentimentalised interpretation that’s underpinned by years of scholarship on both sides.

Renowned Schubert interpreter Ian Bostridge revisits Winterreise, the greatest of all song cycles, on his first PENTATONE album. Bostridge presents this masterpiece together with pianist, conductor and composer Thomas Adès, who bases his profound accompaniment on a fresh engagement with the original manuscripts. Winterreise is the epitome of Romantic melancholia, written by a composer aware of his fatal illness but at the height of his creative powers. It is the first instalment of a trilogy of PENTATONE recordings comprising the major Schubert song cycles. After Winterreise, Die schöne Müllerin and Schwanengesang will follow.

Ian Bostridge is one of the most celebrated tenors and lied interpreters of his generation. Thomas Adès is best known as a composer but demonstrates his extraordinary skills as a song accompanist on his first PENTATONE recording.

Even Bostridge’s sometimes jarring crescendos sound as bleak cries from the hollowed soul. There is a terrifying icy detachment in Adès’s evocative touch. Above it, Bostridge’s weary wanderer cries out against an unlistening world – for why should it listen, the poet seems to ask. In this devastating, brilliant interpretation, Bostridge’s tone is dark, expressive and fluid.

The fact that the singer is 55 hasn’t erased the juvenile timbre of the voice entirely. The hero of this Winterreise sounds boyish in high-lying passages and considerably older in lower ones—we’re almost dealing with two voices. Some sustained notes tend to wobble now. To the singer’s credit, however, he doesn’t try to compensate by pulling back. This new interpretation is as intense as ever, no matter if you find such intensity more irritating than gratifying.

The tenor’s imagination and interpretative skill is made evident at almost every turn…But Bostridge’s reluctance – or inability – to leave a phrase uncoloured, to leave words unpointed, here feels like an inevitable part of a compelling whole…It might arguably be as much Bostridge’s Winter Journey as Schubert’s, yes, but I’m not sure there are many recordings of this ever-astonishing work that are more compelling.

What fresh insights has Bostridge uncovered in the intervening years? Short answer: plenty. One of the remarkable things about this new reading is just how much of the extensive scholarly work which both he and Adès have undertaken translates readily into sound...the balance between pointing up the work’s strange modernity and engaging with its historical context is immaculately judged, and much of the beauty of the interpretation stems from the contrast between the two.

If any audience is present here, they leave no audible sign. Maybe listeners were immobilised by wonder, struck dumb by the impact and wide range of Bostridge’s voice — beautiful, ugly, anguished, tender, robust, bleached...Right from the footstep tread launching the first song, Adès’s piano accompaniment never falters in its imaginative response to imagery and emotional mood...superb artistry brings its own joys.