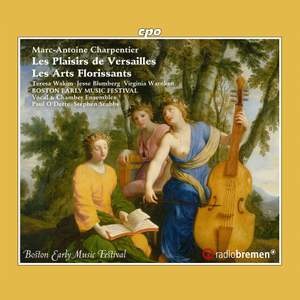 In 2015 our most recent Charpentier recording to date, La Descente dOrphée aux Enfers with young soloists and the Boston Early Music Festival Chamber Ensemble, received the Grammy Award for the »Best Opera Production« of the preceding year and Gramophones »Editors Choice.« Our new CD featuring two »mini-operas« by Charpentier again offers enthralling performances of this court music of charming dance character and elegance. In contrast to Charpentiers other operas, Les Plaisirs de Versailles is directly associated with Louis XIV. The title of the manuscript score registers very clearly and unmistakably what is involved in this composition, and its equation of the »plaisirs,« the »pleasures,« with the kings residence not only serves to reveal the subject but also the context: on the one hand, the work describes the pleasures that could be experienced in the royal palace; on the other hand, it itself is supposed to be one of these pleasures. Once again a beautiful and top-quality work from opera history is made available to listeners of the twenty-first century: An important addition to the Charpentier discography (Toccata).

Throughout the charming performances of both divertissements, captivating interplay between superb instrumentalists, articulate solo voices and choruses of refined intimacy are de rigueur.

What makes these performances such a joy is the ideal portrayal of each character and chorus number, and indeed each detail of the musical presentation.

The performances are in many ways highly commendable, with good to excellent singing, particularly in Les Arts, where the fresh, youthful-sounding voices of Molly Netter as La Poésie and Margot Rood as La Paix are a particular pleasure, with both also displaying a good grasp of French ornamentation.