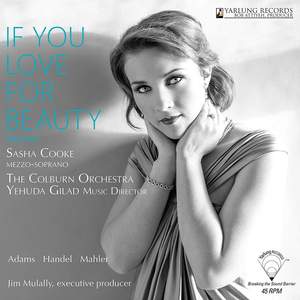 If You Love For Beauty, Volume 1 - Vinyl Edition

If You Love For Beauty, showcases Metropolitan Opera and Grammy Award‐winning mezzo‐soprano Sasha Cooke, and The Colburn Orchestra conducted by Yehuda Gilad.

“combining as she did the outward purity of a Renaissance angel and a voice of powerful sensual warmth and excellent musicality” ‐ Anne Midgette, The New York Times

Yarlung Records exhibited at The Show in Newport with the analogue tape of this album before its release on CD or vinyl. Numerous critics kept returning to the room to hear more of Sasha and this tape. Dr. David W. Robinson, Editor‐in‐Chief of PFO later gave Yarlung the prestigious Audio Oasis award in recognition of his return again and again over the course of the show to hear Sasha and Colburn Orchestra. Sasha and the outstanding Colburn Orchestra offer us a musical oasis indeed.