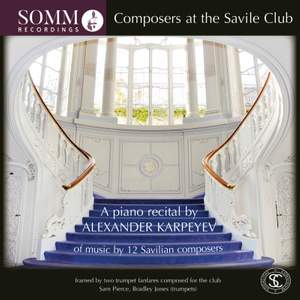 The Composers at the Saville Club

A piano recital by Alexander Karpeyev

Parry: Hands Across the Centuries

Benjamin, A: Scherzino in G Minor

No. 15, Dominique Nabokov [Round and Round]

No. 9, Christopher Cox [Singing a Song]

No. 3, The Leprechaun's Dance

SOMM Recordings is pleased to announce the first commercial release of Composers at the Savile Club, pianist Alexander Karpeyevs vivid and varied recital celebrating the 150th anniversary of the venerable London club. Devised by Karpeyev and Jeremy Barlow (who will celebrate his 60th year as a Savile member in 2020 and also provides informative booklet notes) the recital includes music for solo piano by 11 leading Savile members to chart the development of British music from late romanticism to modernism and back again. Sam Pierce and Bradley Jones perform the two celebratory trumpet fanfares, by former Savilian Malcolm Arnold his Savile Centenary Fanfare and current Savile member, Julian Anderson Fanfare: SCGH composed for the sesquicentennial anniversary that frame Karpeyevs recital. Among British luminaries featured are the composer-knights Edward Elgar (the lyrically atmospheric In Smyrna), William Walton (Façades delightful, dancing Popular Song), Malcolm Arnold (Variations on a Ukrainian Folk Song his most substantial work for solo piano) and Hubert Parry (the delicately antique Hands Across the Centuries Prelude).