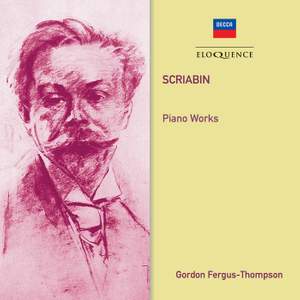 Fergus-Thompson’s Scriabin charts the composer’s stylistic journey with an all-encompassing palette both pellucid and full-blooded. — BBC Music Magazine, October 2019, 4 out of 5 stars

No. 2 Prelude in B Major

No. 3 Prelude in E-Flat Major

No. 2 Prelude in A Minor

Over the course of the 1990s, the Scottish pianist Gordon Fergus-Thompson recorded five albums of Scriabin on the ASV label. Long unavailable, they are compiled and reissued here for the first time complete with original booklet essays by Bryce Morrison.

Interviewed in 1995, at roughly the halfway point of the series, Fergus-Thompson remarked that he found ‘an essential continuity in Scriabin’s language. There’s a special sort of logic in the progress from the First to the Tenth Sonata. Scriabin was a new, entirely original kind of composer/pianist and even in his earliest works his flightiness and volatility are paramount. It’s an extraordinary experience playing and recording this music, alternately exhilarating and unnerving.’

Renowned both for his Debussy and his Rachmaninov, Fergus-Thompson is thus ideally equipped to elucidate the transient, haunted world of Scriabin. His playing strikes a balance between precision and spontaneity, between intellect and emotion. He faithfully mirrors the development of Scriabin’s style as it departs from the sideways romance of the Op. 3 Mazurkas and becomes increasingly fragmented, full of tensions abruptly set up and terminated. At the point where the series itself was terminated in 2001, Fergus-Thompson had recorded the complete Etudes, Preludes and many other shorter pieces as well as six of the ten sonatas (Nos. 2-5, 9 and 10). Throughout the series, critics noted his refined tonal elegance, fully conveyed by the spacious and detailed ASV recording, and his innate feeling for Scriabin’s superfine intricacy and exotically

perfumed harmonies in the later music.

‘Gordon Fergus-Thompson clearly has his hands on the nerve centers of this music, and he has here given an all-too-brief collection of revelatory performances.’ - Fanfare (CD1)

‘For those who wish to savour Scriabin’s often bewildering changeability without having their emotions torn to shreds, Fergus-Thompson is uniquely spellbinding in this repertoire.’ - International Piano (CD3)

‘The elusive character of these fascinating and neglected works could hardly be presented more vividly and insinuatingly than by Fergus-Thompson.’ - Gramophone, June 2000 (CD4)

Fergus-Thompson’s Scriabin charts the composer’s stylistic journey with an all-encompassing palette both pellucid and full-blooded.