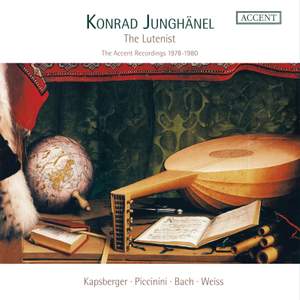 Today Konrad Junghänel - with his ensemble Cantus Coelln and as guest conductors in opera houses - is one of the leading conductors in the field of early music.

The 3CD box recalls the beginning of his career when he was internationally in demand and celebrated as a solo lutenist.

The three recordings of lute music from Italy and Germany, which Konrad Junghänel recorded for the Belgian label Accent in the late 1970s, are collected here.

He was awarded international prizes for his recordings of the lute works of Johann Sebastian Bach and the solo works of Silvius Leopold Weiss.