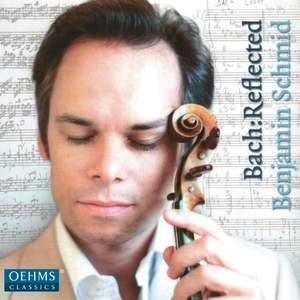 Kern: All the Things You Are (From "Broadway Rhythm")

Austrian violin virtuoso Benjamin Schmid about this recording: “after 30 years of playing the master, the time felt right to improvise on Bach: Bach as the inventor of “walking bass“; master of improvisation; figured bass and Realbook; swing of the centuries; variation as form; Sarabande and Blues; Aria and leadsheet; pedalpoint and modal jazz; counterpoint and voicing; Cantata and Gospel; ultimate chamber music….. I just followed the temptation and inspiration took over!“ Benjamin Schmid was born in Vienna and grew up in Salzburg. Among other competitions, he won the Carl Flesch Competition in London 1992, where he was also awarded the Mozart-, the Beethoven- and the Audience Prize. Since then he has performed on the world’s major stages with renowned orchestras such as the Vienna Philharmonic, the Philharmonia Orchestra London, the St. Petersburg Philharmonic, the Concertgebouw Amsterdam under conductors such as Christoph von Dohnanyi, David Zinman, Seiji Ozawa or Valery Gergiev. As one of the most versatile of today's violinists Benjamin Schmid combines his qualities as a soloist, the extraordinary broad range of his repertoire – in addition to the usual works he also plays the violin concertos by Hartmann, Gulda, Korngold, Muthspiel, Szymanowski, Lutoslawski and Reger – with his remarkable skill in jazz improvisation.