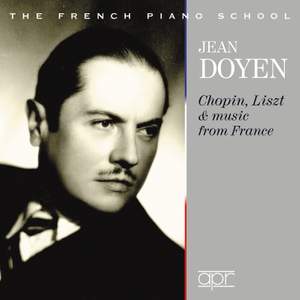 Doyen’s Chopin, luminous but never underweight, is extremely enjoyable, and his less portentous approach to Liszt also serves as a corrective to the overly earnest recordings and performances... — Fanfare, January/February 2020 More…

Jean Doyen is perhaps the archetypal French pianist. Taught by Louis Diemer and Marguerite Long, he went on to become the second longest serving piano professor in the Paris Conservatoire’s history and largely dedicated his career to his homeland. In addition, his repertoire centered on the French classics, with Chopin also taking pride of place. His early recordings reveal a spectacular technique coupled with generous musicality and expression – it’s no wonder he was chosen for this premiere recording of Ravel’s ‘Gaspard de la nuit’. His Chopin Op 2 Variations and the complete Book 1 of Debussy’s Images are also recording firsts, but for sheer virtuoso exhilaration, his rare Sonabel album of Chabrier’s Espana is hard to beat. Surprisingly, none of these marvelous performances have previously been reissued.

Doyen’s Chopin, luminous but never underweight, is extremely enjoyable, and his less portentous approach to Liszt also serves as a corrective to the overly earnest recordings and performances that later became fashionable. His sparkle in Saint-Saëns’s fluffy Valse-caprice and in Chabrier’s Bourrée fantasque are unique. Above all, try this set for the Debussy and Ravel recordings, which demonstrate why Doyen’s reputation in France was as high as it was, especially among composers and fellow musicians

I hadn't dreamed that he had been the first ever to record Gaspard...Unsurprisingly the sound is monochrome by modern standards, but that may be as much to do with the instrument used; and once you're attuned to Doyen's flamboyant but super-agile manner, you may find this more satisfying than many a more exhibitionist modern account.

The set contains all four of Chopin’s Ballades (1941, in superb transfers that brilliantly convey nuance of tone). Robert Cowlin and Seth Winner, responsible for mastering and transfers, have produced an historical release of the very first order.

proves as illuminating stylistically as it is convincing artistically.