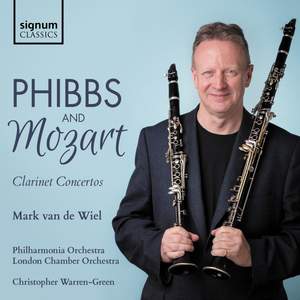 Phibbs has built up an attractive catalogue of orchestral works, always lucidly and colourfully scored, of which the Clarinet Concerto is a substantial and inventive example. Its serene opening... — BBC Music Magazine, October 2019, 4 out of 5 stars More…

Mark van de Wiel joins the Philharmonia Orchestra under Christopher Warren-Green in the premiere recording of Joseph Phibbs’ Clarinet Concerto, praised by The Sunday Times (following its UK debut) as a work “that will surely be performed all over the world.”

Following a long friendship between composer and soloist, Phibbs and van de Wiel collaborated to create this stunning and virtuosic new work for the clarinet and orchestra, which features a thrilling cadenza at the end of the first movement.

It is paired with a scintillating live concert recording of Mozart’s timeless Concerto for Basset Clarinet in A Major, K. 622, performed with the London Chamber Orchestra.

Phibbs has built up an attractive catalogue of orchestral works, always lucidly and colourfully scored, of which the Clarinet Concerto is a substantial and inventive example. Its serene opening draws on Van de Wiel’s gift for shapely-phrased legato…Warren-Green secures crisp rhythms and vivid detail from the Philharmonia in life-like sound.

Phibbs’s 2017 Clarinet Concerto encompasses elements of jazz, klezmer and Americana, and opens with a shimmering aubade for soloist, harp and muted strings that’s one of the loveliest things I’ve heard all year. The account of the Mozart (performed here on basset clarinet) is also well worth hearing, not least for the deliciously spacious slow movement and van der Wiel’s tasteful ornamentation.

Van de Wiel gives superb performances, that of the Mozart a live one. The clarinet concerto by Phibbs was composed for him, and he makes a magnificent case for it. It’s felicitously written, the language not far from traditionally tonal, the stylistic range considerable.

[The Phibbs is] an energised and energising work, well worth exploring.