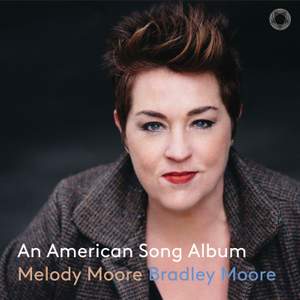 No. 1, At Saint Patrick's Purgatory

No. 2, Church Bell at Night

No. 4, The Heavenly Banquet

No. 10, The Desire for Hermitage

No. 1, These Strangers, in a Foreign World

No. 2, In the Midst of Thousands

Heggie: How Well I Knew the Light

No. 2, The Sun Kept Setting

No. 2, A Summer Vacation

No. 3, All Through the Night

An American Song Album is a fine collection of songs by American composers, presented by soprano Melody Moore. The repertoire includes Samuel Barber’s introspective Hermit Songs, Jake Heggie’s engaged cycles These Strangers and How Well I Knew the Light, Carlisle Floyd’s exploration of motherhood in The Mystery, Copland’s impressionist and oriental Four Early Songs, as well as a varied selection from Gordon Getty’s vocal works. Set to Irish, Welsh, Chilean, German, Arabic and Afro-American poetry, these pieces constitute a panorama of the US as a melting pot of cultures, while simultaneously being bound together by an unmistakably American sound. Melody Moore manages to lift out the poetry of these works with her warm, lyrical voice and impeccable vocal technique. She is accompanied on the piano by Bradley Moore, one of the most eminent conductors and song accompanists of today’s American musical scene.

With her first solo album, Melody Moore continues her PENTATONE discography that already features recordings of leading roles in Gordon Getty’s Plump Jack (2012) and The Little Match Girl (2015), as well as Desdemona in Verdi’s Otello (2017).

A performance full of interest and vividly communicative artistry.

As an overall collection of American songs presented at a very high level, this one is far above the norm. Moore’s partner, Bradley Moore (no relation), is an experienced conductor and pianist who specializes in vocal and American music, and he contributes lyrical, warm playing.

Melody Moore’s ‘An American Song Album’ feels personal and custom-made for her ample lirico spinto instrument. And that’s always a good place to start. She can thunder darkly, she can float, she can spin – she has the full expressive armoury. But, more importantly, the choices here plainly mean something to her and there’s no mistaking the high level of engagement that sets the best of them apart.

This debut solo recital the American spinto soprano is an absolute joy: sensitively captured by Pentatone’s engineers, Moore’s big, bright voice can do everything, from exquisitely-controlled pianissimo high notes (try the end of the third Hermit Song) to the full-throttle climax of Floyd’s At Dawn. She’s the warmest, most natural of communicators, and her diction’s a model of clarity throughout her wide range.

This recording is a calling card for a genuinely exciting and electric voice, solidly gleaming, with the high range of a soprano but fleshed out with dark, mezzo-ish colours and with its voluptuous richness focused into singing of striking directness and clarity.