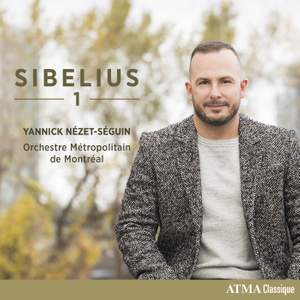 This is the first album in a new series of recordings dedicated to the symphonies of Jean Sibelius on the ATMA label.

Conductor Yannick Nezet-Seguin leads the Metropolitan Orchestra of Montreal in Sibelius’s Symphony No.1.

Artistic director and Chief Conductor of the OM since 2000, Yannick Nezet-Seguin is one of the most in-demand conductors in the world. In September 2018, he became the third musical director of the Metropolitan Opera in New York. Music Director of the Philadelphia Orchestra since 2012, he was appointed Honorary Chief of the Rotterdam Philharmonic Orchestra and served as Music Director from 2008 to 2018. As a major cultural ambassador for Quebec, the Orchester Metropolitain de Montreal takes a bold gamble from its founding in 1981 to weave a link with the public to promote symphonic music.

As a recipient of numerous national awards, the Orchestra owes its international renown to their twenty records, most of which recorded with ATMA Classique.