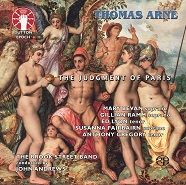 Arne: The Judgment of Paris

Expert in British esoterica, John Andrews secures generally cheerful and passionate performances from his cast and The Brook Street Band that certainly tickle the ear. But this is a curio, not... — BBC Music Magazine, September 2019, 3 out of 5 stars More…

Arne: The Judgment of Paris

Interview,  John Andrews on Arne's The Judgment of Paris

The conductor talks to David about his new recording of Thomas Arne's long-forgotten work, inspired by the contest of the three goddesses in Greek mythology.

Thomas Arne’s opera The Judgment of Paris (1742), a setting of William Congreve’s libretto of the same name, is known only from the printed score, but in this world premiere recording is performed with panache and authority by The Brook Street Band and a scintillating young cast led by sopranos Mary Bevan (Venus), Susanna Fairbairn (Pallas) and Gillian Ramm (Juno), with tenors Ed Lyon as the shepherd Paris and Anthony Gregory as Mercury, all under the expert direction of conductor John Andrews. By the end of the opera we are not surprised when Venus’s softly, softly appeal to her shepherd judge succeeds over the more demonstrative blandishments of her competitors, Pallas and Juno. This is a lovely discovery, with all the cast joining in the spirit of this fable to give it a stylish and compelling revival.

Expert in British esoterica, John Andrews secures generally cheerful and passionate performances from his cast and The Brook Street Band that certainly tickle the ear. But this is a curio, not a masterpiece.

There’s not a dull moment in Arne’s sunny score; the three rival goddesses are vividly characterised by both composer and singers, but the stand-outs for me were Susanna Fairbairn’s imperious 'The glorious voice of war' (capped with a rock-solid high D) and Mary Bevan’s indolently voluptuous ‘Nature fram’d thee sure for loving’. Ed Lyon’s in virile voice as the hero, whetting the appetite for his debut solo disc on Delphian later this year.

It’s all sung with a suitable lightness of touch, with sparkling accompaniment from the Brook Street Band, all artfully directed by John Andrews.