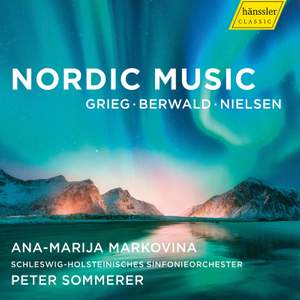 A well-balanced combination of piano concertos. Sweeping Nordic landscapes and folk inflections are played with sensitivity. Only slight heavy-handedness in the Grieg mars it a little. — BBC Music Magazine, August 2019, More…

Ana-Marija Markovina is an authentic an unconventional artist. The classical music industry has become a hard business, but she never lost sight of the fact that music needs freedom, the desire for the unpredictable and sometimes the courage to take a risk. Her guide and her motivation is always the human being behind the music.

The albums of the complete works for solo piano by Bruckner and Urspruch were praised by press and media throughout the world. Recent projects of Ana-Marija Markovina include the recording of the complete piano solo works of Felix Mendelssohn Bartholdy as well as the piano concertos of Edvard Grieg and Franz Berwald. Numerous radio and television recordings in Germany, Europe, North and South America, Russia and Asia, plenty of concert recordings and her enormous discography complete her profile and unmistakable style.

Ana-Marija Markovina devotes herself with great passion to pedagogical work. Her worldwide, international masterclasses attract a large number of participants. She has an extraordinary empathy for the personality, the level of education and the skills of her students and puts particular emphasis on the cultural, psychological and biographical background of the music being worked on.

A well-balanced combination of piano concertos. Sweeping Nordic landscapes and folk inflections are played with sensitivity. Only slight heavy-handedness in the Grieg mars it a little.

The disc is worth considering for the Berwald Concerto, which does not have a strong history of previous recordings.The soloist never stops playing throughout its three movements. Markovina is ideally suited to supply this endless filigree, and gives a scintillating performance brightly supported by Sommerer’s band. Again, sound quality is an asset in this rarely heard work.

Markovina achieves a good balance with her orchestral partners and her handling of the demanding classical textures is highly assured and expressive.