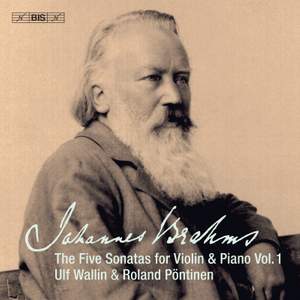 [G Major Sonata] Wallin plays with a sweet tone, producing some lovely pianos in the second movement, and pianist Pöntinen is agreeably responsive throughout. All three movements are notably... — Fanfare, January/February 2020 More…

Brahms: Scherzo in C minor for violin and piano, WoO 2

Asked the question ‘How many sonatas for violin and piano did Johannes Brahms compose?’, many lovers of chamber music would probably answer three, and maybe also add their respective keys and opus numbers. When pressed, a number of them would also remember the so-called F.A.E. Sonata, a collaborative effort by the young Brahms, Albert Dietrich and their mentor Robert Schumann. But very few would probably think of the two Opus 120 sonatas, composed in 1894 for clarinet (or viola) and piano, but a year later published in the composer’s own version for the violin. As the range of the B flat clarinet goes a fourth lower than that of the violin, Brahms had been forced to make considerable revisions to the clarinet part – which in turned entailed changes in the piano part, and consequently the printing of a new piano score. The seasoned team of violinist Ulf Wallin and pianist Roland Pöntinen have now decided to record all the Brahms sonatas, and the results are being released on two albums, the first one including the first of the ‘official’ sonatas, No. 1 in G major, Op. 78, the F minor Sonata from Op. 120 and Brahms’s Scherzo from the F.A.E. Sonata. Wallin and Pöntinen round off the programme with transcriptions of two of Brahms’s more lyrical songs.

[G Major Sonata] Wallin plays with a sweet tone, producing some lovely pianos in the second movement, and pianist Pöntinen is agreeably responsive throughout. All three movements are notably relaxed in tempo, the sonata having a total duration of 29:20.

The Adagio is gentle and sometimes mysterious, and the finale light and airy. Pöntinen is a fine and sensitive partner. The recording is close, with some resonance.